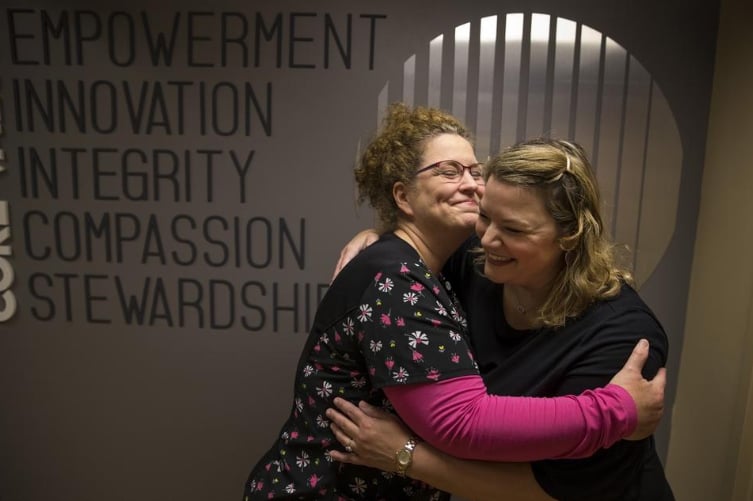 It was a Saturday evening when Bev Gillaspie found the cancer growing in her breast. Just five months before, the Eugene resident received a mammogram with clear results, but the tumor was already so large she could see its lumpy protrusion beneath her skin when standing in front of a mirror.

Gillaspie, 60, is one of about 51,500 Oregon women who faced breast cancer in 2017, according to the National Cancer Institute. That’s nearly half of all cancer cases among women in the state — it is the most common cancer diagnosis for women in Lane County, mirroring state and national cancer trends.

Oct. 1 marks the beginning of Breast Cancer Awareness Month, putting a focus on a disease that 1 in 8 women will face during their lifetime nationwide, according to the American Cancer Society. Breast cancer also occurs in men, at a rate of 1 in 1,000 nationwide. A year and a half after her diagnosis, Gillaspie’s prognosis is good, although she has an aggressive form of breast cancer called triple-negative that’s difficult to treat, she said.

For women, such as Gillaspie, a breast cancer diagnosis brings a sudden avalanche of appointments, scans, biopsies, surgeries and treatments — and with each step of the treatment process comes its own set of challenges and difficult decisions.

Each woman handles the sudden loss of control over her body differently. Some seek help from family, friends and support groups. For others, it’s a private journey. While teams of medical doctors and nurses tailor each woman’s medical care to her individual needs, it’s crucial that these women become their own self-advocates in the midst of a daunting process.

“The ball began to roll very fast — very, very fast,” Gillaspie said. “Within a week I’d had ultrasounds and MRIs and biopsies.”

Reaching a diagnosis
There are multiple forms of breast cancer, necessitating specific types of treatments, which also can vary depending upon each woman’s unique physiology and the extent of her disease. The first step is locating and understanding the type of cancer.

Depending on a woman’s breast tissue density, different imaging techniques must be used to create a clear picture of the disease, said Dr. Michael Milstein, director of Cedar Clinic, an imaging center at Oregon Medical Group in Eugene.

When an abnormality is picked up during a screening, a patient “navigator,” a person who guides and advises a patient through their treatment, calls the patient back in for an in-depth work-up. This can be a more focused diagnostic mammogram of the area, an ultrasound, or an MRI, Milstein said. An MRI is often the last step in imaging, helping the breast surgeon decide what type of surgery is necessary. It gives them the most accurate picture of the cancer, showing other areas of possible concern and lymph node involvement. After necessary imaging is complete, a biopsy, or a tiny sample of the lesion, is taken using a needle or surgery and sent to a pathologist.

“You really don’t know what you’re dealing with until you have that biopsy done. It tells us a whole lot about what type of cancer they have, if it’s fueled by estrogen, if it’s involving the blood vessels, if it has that protein that makes it more aggressive called HER2/neu,” said Dr. Benjamin Cho, medical oncologist at Willamette Valley Cancer Institute.

At Cedar Clinic on Country Club Road in Eugene, about 10,000 screening and diagnostic mammograms were performed in 2017, Milstein said. Of those, 500 to 750 were called in for additional testing. And, 35 percent to 45 percent of women who receive a biopsy are diagnosed with cancer.

“Every year, we are finding cancer in between 100 and 150 women,” Milstein said. “That’s a population of Eugene that’s getting screening, so it’s a significant amount.”

‘Deer in the headlights’
Within two business days, patients usually receive their biopsy results over the phone.

Patient navigators at imaging centers — the first of many navigators in the cancer care network that a breast cancer patient encounters — are often the ones to break the news.

“To someone who’s never had a problem with their breasts before, they are just like a deer in the headlights,” said Cindy Davis, Oregon Imaging Centers’ breast center patient navigator. “I have to tell these ladies that they have breast cancer, and they’re never going to forget that moment in time.”

Davis said that her role is to help assess the physical, psychological and social needs of patients. Cancer treatment can be a medical obstacle course, and a nurse or nursing assistant patient navigator is usually there to help with the myriad questions, providing support and coordination.

For Tina Miller, a nurse navigator at Cedar Clinic, the most challenging part of navigation is taking her own opinions out of the equation.

“I have to be really careful when I’m talking to a patient that I’m not projecting my ideas or my feelings on to her,” Miller said. “I have to step back, give her the space and let her figure out how she feels about it and how she wants to handle it.

“The breast surgeon will sort of become the gatekeeper of their care,” Miller said.

Miller helps schedule a surgical consult with the first-available surgeon, unless the patient has a preference. Most patients see a surgeon two weeks after a diagnosis, but it can take up to a month.

She recommends that patients bring someone with them to see the surgeon, so later that person can help the patient process and remember specifics that may have overwhelmed them at the time.

But before any big decisions are made, she advises patients to slow down and make clear decisions.

“It’s OK to stop, take a breath and give yourself some time — whether that’s five minutes or five days — and let it sink in,” Miller said. “There’s treatment out there. This isn’t necessarily a death sentence.”

Even though it’s not usually a death sentence, it’s still terrifying, she said, and each woman approaches the struggle her own way.

“Some patients need other people to take charge, and others need to be in charge and know that they have people behind them,” Miller said. “We all handle it differently, and that’s probably the biggest challenge.”
For Gillaspie, “Throughout the whole ordeal, physically I was phenomenally strong,” she said. “Emotionally, I was a wreck.”

Outcomes improving
Despite breast cancer’s prolific nature, deaths have steadily decreased over the last decade, according to Brian Johnson, epidemiologist at Lane County Public Health. About 50 women died from the disease in Lane County in 2010, compared to 45 in 2016.

Overall survival rates have improved, due to a decrease in smoking, continued cancer research and effective treatments and therapies, Johnson said.

Researchers at the Willamette Valley Cancer Institute and Research Center in Eugene are contributing to some medical advances in cancer, Cho said. At WVCI, oncologists run clinical trials of new cancer drugs and treatment combinations that some patients in Lane County can access.

Early-stage breast cancer has a five-year survival rate of 96 percent, according to the American Cancer Society.
That’s why early detection through yearly mammograms for women older than 40 is key, Milstein said.
Although outcomes are improving, patients face deep emotional turmoil during treatment and they are all intrinsically changed by the experience.

“After you finish treatment, it’s not like a light switch,” Cho said. “Although people may think that you’re done and you’re just like you were when you started, you’re not. Although the hair grows back and visibly you are the same, you are not. It takes many, many months to recover from that.” 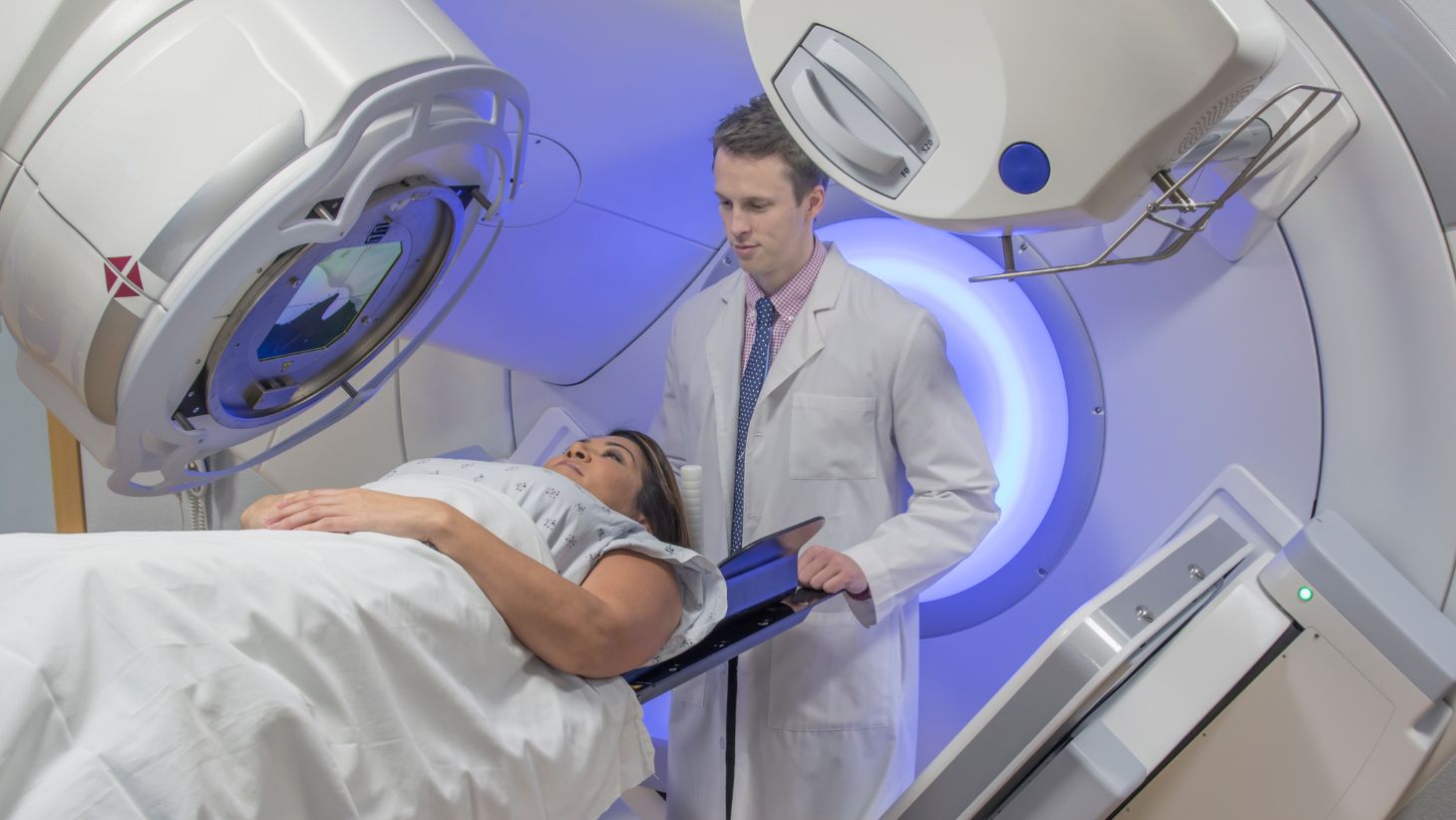 How is Radiation Therapy Used to Treat Breast Cancer?

Should Surgery Be Done Before Other Breast Cancer Treatments?

Triple-Negative Breast Cancer: Why Is It Harder to Treat?