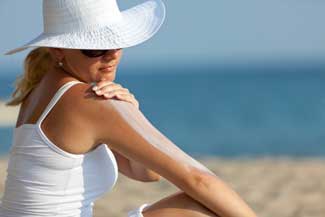 Oregon is not considered to be the sunniest state in the U.S., but according to a new study published in the International Journal of Cancer, our state ranks in the top ten for the highest rates of melanoma linked to UV radiation.

The study shows cases of melanoma in the United States increased 2% a year between 2005 and 2015, and if the trend continues, it will likely rise from 96,000 cases in 2019 to 151,000 cases in 2030. Researchers cite several possible reasons for the increase in cases, including the high number of teen girls who used indoor tanning beds in the late 1990s.

What is melanoma?
Melanoma is the rarest but most serious form of skin cancer that begins in cells known as melanocytes. While it is less common than basal cell carcinoma and squamous cell carcinoma, melanoma is more dangerous because of its ability to spread to other organs if it is not treated at an early stage.

Skin cancer is typically associated with changes on the skin, however, approximately 15% of patients diagnosed with melanoma show no visible skin changes; the cancer is often spotted after it spreads to the lymph nodes and patients noticed a bump in their neck or groin area. The American Cancer Society estimates that more than 100,000 people will receive a diagnosis of melanoma in 2020.

“The incidence of melanoma is much higher than the mortality rates, which means we’re catching it early for most patients,” says medical oncologist Dr. Keith Wells. “And, because we can catch it early, we can treat it appropriately.”

“In combination, targeted therapies and immunotherapies have really changed how we treat melanoma,” Dr. Wells says.

Reducing your risk of melanoma
Protecting the skin starting at the earliest possible age helps reduce the risk of developing melanoma.

“The sun exposure that someone experiences may not make them at risk for melanoma immediately, but down the road is when that risk manifests,” says Dr. Wells. “So, it’s important to pay attention to your body and see your doctor if you have concerns.”