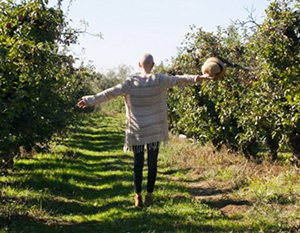 Lindsey Bills was excited about all the things she would learn when she enrolled at the University of Oregon. She didn’t expect cancer to become part of her learning experience.

Everything changed for Lindsey when she noticed a swollen lymph node on the right side of her clavicle in November 2013.

“On my 20th birthday, I was on a trip to Portland with some friends,” she says. “During the trip, I would get twinges in that area and I started to feel like something was wrong.”

Lindsey underwent a chest X-ray and blood work at the University’s Health Center and was referred for a biopsy the day before Thanksgiving. The results confirmed Lindsey had Hodgkin lymphoma, a form of blood cancer. 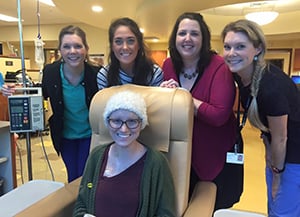 Lindsey, along with friend Michaela (2nd from left), is all smiles with WVCI staff: Courtney Stefansen (left) Anne Gallagher and Katie Ogle (right).

A change of plans
After her diagnosis, Lindsey underwent several months of chemotherapy at Willamette Valley Cancer Institute. By May, her cancer had become more aggressive and oncologist Dr. John Fitzharris recommended another type of chemotherapy. Due to exhaustion and side effects from treatment, Lindsey had no other choice but to put college on hold.

“That made it pretty real for me. The cancer’s toll wasn’t just physical anymore. It was taking a toll on my education,” she says. “It was hard not to be at school, but I had a lot of support from my family, saying I needed to take care of myself and focus on me.”

Lindsey began radiation that fall and on her 21st birthday, she received good news: her cancer was in remission. Six months later, Lindsey’s cancer returned and it had spread. She spent her second summer in a row undergoing high-dose chemotherapy. This time, she and her cancer care team hoped to get her back into remission, so she could undergo a stem cell transplant with her own cells. The chemotherapy worked and the transplant was performed successfully. 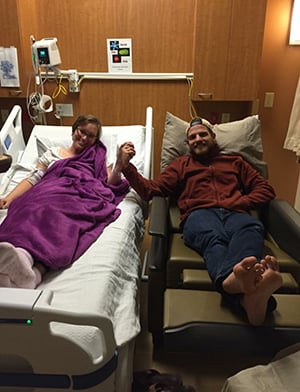 Focusing on a new path
Lindsey is currently undergoing a year of maintenance chemotherapy, which she started in December. She’s feeling good, her energy has returned, and she’s hoping to resume college classes this spring. She says she’s changed her major from speech and language pathology to family and human services, because of the wonderful care she’s received from WVCI’s staff.

“I really connected with Dr. Fitzharris and the nursing staff. It was comforting to know I could trust them, and they took such good care of me.”

Another important member of Lindsey’s care team is patient navigator Anne Gallagher. It was after meeting Anne that Lindsey realized she wanted to change her course of study.

“Emotionally, Anne’s been an incredible source of support. She was the calming presence that my family and I needed to get us through those times when the news wasn’t so good,” Lindsey says. “I want to be a patient navigator, too, so that I can be there for others—just like she was there for me.”

A different perspective
Cancer has changed more than Lindsey’s career path. She now looks for moments in life to celebrate and takes nothing for granted.

“I try to concentrate on being present, being in the moment and remembering what’s important each day,” she says. “There are times I forget, but when I wake up and go to bed, I think about the good things that are happening in my life.”

It was during her cancer journey that Lindsey also met her fiancé, Chad; the couple is planning to marry next month.

“I not only have new, personal goals, but I have a partner that I can envision my future with—it’s the amazing light at the end of my dark tunnel.”