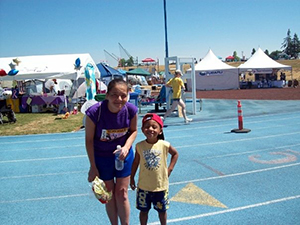 Trenda Dominguez is grateful every day—grateful to assist patients though her job as a scheduler for Willamette Valley Cancer Institute’s gynecologic oncology department and grateful to call herself a cancer survivor.

Nearly ten years ago, at age 35 and just after the birth of her son, Trenda was diagnosed with Hodgkin’s lymphoma.

“I remember being tired, and I didn’t feel great, but I also had a newborn and I was in the process of looking for a job, so it made sense that I was tired,” she says.

It was during a post-partum doctor’s visit that Trenda mentioned she’d found a lump in her neck. She was told it was probably a pulled muscle, so she didn’t think about it again until she saw her primary care physician a month later. Her doctor ordered an ultrasound.

Trenda underwent surgery to remove the lump, but a CT scan revealed she also had a large cancerous mass in her chest and tumors scattered throughout her body, down to her pelvis.

“I was devastated. I had a new baby and a daughter in high school and I thought I was about to lose everything,” she says.

Trenda began chemotherapy then radiation. She admits it was a difficult time. But the tremendous care she received from the doctors and staff at WVCI left an indelible mark on her—so much so that she left her job as a social worker and came to work at WVCI.

“I want to be able to give the same kind of support to our patients that I received,” Trenda says. “It’s a big deal for me to be able to work here. My journey has truly come full-circle.”

Trenda is also thankful that WVCI staff will once again be participating in the Eugene-Springfield Relay For Life. The American Cancer Society’s annual walk takes place Friday-Saturday, July 15-16 from 6 pm to noon the following day at the Sports Park at Willamalane Center in Springfield.

“If there is any opportunity for the staff at WVCI to be a part of supporting our patents, they’re all over it. This is not just a clinic or a business or a group of doctors. They care. They are in it to win it,” Trenda says of her co-workers, proudly. 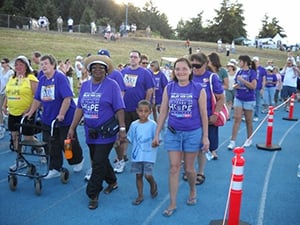 Trenda walking the Survivors Lap at the 2011 Relay For Life

This will be Trenda’s first year as a member of WVCI’s Relay For Life team, but it is her 11th year attending the event. The first year she attended, she was in treatment.

“I remember going into the Survivors Tent and a woman asked me what size I was because she wanted to give me a T-shirt. I told her, ‘Oh, I’m not a survivor, I just came in here to look around,'” Trenda recalls. “The woman looked directly at me and said, ‘When you take your first breath after getting your diagnosis, it means you are surviving.’ She probably has no idea how impactful that statement was. But that is why I relay.”

When Trenda participates in this year’s Survivors Lap at Relay For Life, she will do so in support of herself, fellow co-workers who are also cancer survivors and WVCI patients.

“For me, the Survivors Lap is a flashback of my journey and how far I’ve come. It is truly a fight when you’re fighting cancer, and there are days you don’t want to do it, but you have to. So, I love the Survivors Lap, I’ve earned every step.”