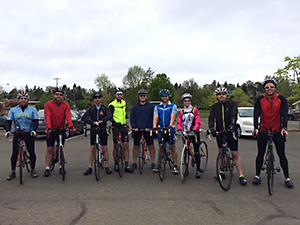 A test of endurance, an act of compassion

If someone had told Dan Johnston last year that he would compete in a triathlon, he’d have said they were crazy. But, this weekend, Dan will compete at the Pacific Crest Weekend Sports Festival in Sunriver, Oregon.

“I never imagined doing a triathlon in my life. Honestly, I thought it sounded awful,” Dan says. “It blows my mind that I’m able to do this.”

Beside him at this weekend’s race will be Kathy Eckert-Mason. When Kathy turned 50, she set a goal to compete in 100 endurance events by the time she turned 60. She reached that goal last summer—two years early.

“I grew up swimming competitively, then I got into running. After that, I bought a bike and voila!—I was doing triathlons,” she says.

Dan’s and Kathy’s experiences with triathlons couldn’t be more different, but that’s the beauty of Team Endure. The team, started by Mike and Jeanette Carbaugh two years ago, gives people with different fitness levels an opportunity to come together and experience something extraordinary—to push themselves out of their comfort zone and test both their physical and mental endurance, as well as their will and determination. 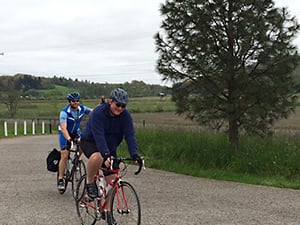 “This team is smartly coached. It doesn’t seem possible that I should be able to do a triathlon, but the training goals have been achievable,” Dan says. “Without the support from this incredible team, I don’t think I’d have the gumption to do it on my own.”

Team Endure trains year-round, and members participate in various community races, but their main event is the Pacific Crest Weekend Sports Festival. This year, two members of the team, Dr. Charles Anderson, a gynecologic oncologist at Willamette Valley Cancer Institute, and Jerry Whitmore, will compete in the Half Ironman triathlon—a 1.2-mile swim, a 58-mile bike ride and a 13.1-mile run.

Dan and Kathy, and other Team Endure members, will compete in the Olympic Distance triathlon, which consists of a .9-mile swim, a 28-mile bike ride and a 6.2-mile run.

In addition to participating in the race, this is the third year the team is raising money for Oregon Cancer Foundation (OCF). The Foundation provides stopgap financial assistance to patients receiving cancer treatment in Lane County, so they don’t have to choose between basic needs and treatment.

Supporting OCF is just as important to the team as crossing the finish line, because they’ve all been touched by cancer in some way. Dan lost his dad last year after a long battle with carcinoid cancer, and Dan and his brother are currently involved in a study with the National Institutes of Health, in an effort to better understand the genetic components of the disease. 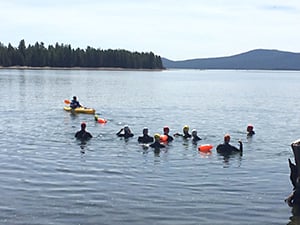 Kathy lost two of her cousins to cancer. It’s what drives her to fundraise for OCF and to push herself in every race.

“You tell yourself, suck it up. You can stop this at any time, but someone who has cancer can’t stop. I’m always thinking about who I’m doing this for, and it keeps me going,” she says.

When Dan competes this weekend, there is no doubt he will be thinking about his dad.

“He would be pleased and proud that I’m taking care of myself and modeling for my kids how important it is to do that and to help others in the community who need it.”