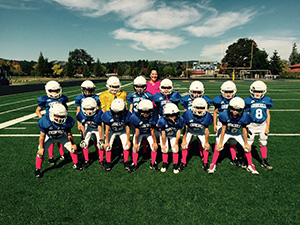 One of Julie Jenkins’ favorite things is watching her 4th grade son, and his friends play football. Last weekend’s game is one she will never forget.

“It was amazing. I was so touched. It made me cry,” she said. Julie is one of the team moms for the Churchill Pop Warner Junior Pee Wee team in Eugene. She is also a breast cancer survivor. The team of 9- and 10-year-olds surprised Julie when they showed up for Sunday’s game wearing pink socks.

“For our games in October, we will wear these pink socks in your honor,” player Tyler Mikel told her, reading out loud a special letter the team wrote to Julie.

“You are kind and helpful and have a nice smile. We are lucky to have you on the sidelines cheering us on,” he read to her, surrounded by his teammates and their parents. “This season, we will play with pride because our team mom is a fighter and a survivor. And we will gain strength from your fierce determination. Thank you for being you.”

The boys each handed Julie a carnation then huddled around her chanting, “Kick cancer!” before taking the field for the game.

Julie was diagnosed with breast cancer in January of 2013, a week after getting a clean bill of health during her annual physical. It was during a self-exam in the shower that Julie discovered several lumps, which turned out to be a large and aggressive tumor that had spread to her lymph nodes.

“Maybe cancer should have been on my radar, but it wasn’t,” Julie says.

She underwent chemotherapy to shrink the tumor before surgery, but the tumor continued to grow. Julie had a mastectomy, followed by more chemotherapy and radiation. She was in fight mode, thinking not only of herself but also of the people who love her. “I have two kids. I’m a wife. I’m a daughter. My family needs me.”

For Julie and her family, it was a difficult time, physically, emotionally and financially. Unable to work, Julie’s husband, Shawn, stepped up and handled all the things she could no longer do. Families from her children’s school offered support, too.

“Even people I barely knew came together to provide meals. They sent me texts offering to pick up the kids for me and take them to their events and activities,” Julie says. “I’m not one to ask for help, but they made me accept it, and it was amazing.”

“For anyone to have to choose between treatment and paying their bills, that’s just heartbreaking,” Julie says. “Oregon Cancer Foundation was there to help me. And I want to return the favor.”

Being diagnosed with cancer has inarguably changed Julie’s life. As a pharmaceutical rep, Julie used to travel the state meeting with clients. Now, she makes sure she’s home for dinner every night to be with her family.

She says there are still moments when she worries the cancer will come back, but instead of focusing on that, she concentrates on what brings her joy—like the Churchill Pop Warner Junior Pee Wee team and the sweet boys who are wearing pink socks this month, just for her.

“It’s another reminder to live life every day and appreciate what’s really important,” Julie says. “Time is the most important commodity we have. We need to make it count.” 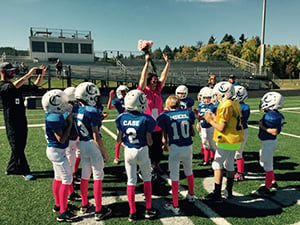 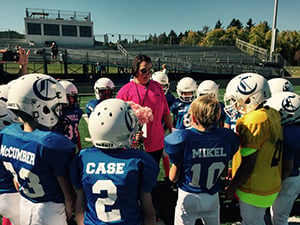