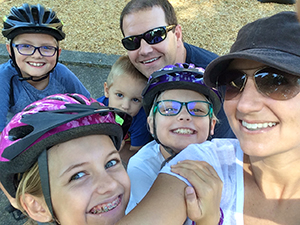 Mother of four finds inspiration in music after cancer diagnosis

If someone wrote a country music song about Sara Kaster’s life, she would want it to exude hope, strength, perseverance and triumph.

Those are the types of songs Sara listens to, to help her stay positive in her three and a half year fight against colorectal cancer.

“I didn’t recognize the signs of the disease because I was pregnant with my youngest child,” The 38-year-old mother of four says. “When my son was 7 months old, I went to the doctor and was diagnosed with stage 1 cancer.”

That was June of 2012, then Sara underwent surgery. Not long afterward, she returned to work as a pediatric nurse, feeling confident that she was in the clear. But in 2014, Sara began experiencing pain and night sweats. Doctors ruled out premenopausal symptoms and a PET scan revealed nodules in her lungs. The cancer had spread.

“I was told that it could come back,” Sara says. “I was vigilant about getting follow up colonoscopies and having regular blood tests, so to have the cancer come back in my lungs I thought, ‘Oh my gosh, that’s crazy.’”

Sara immediately started chemotherapy to shrink the tumors, then flew to the Mayo Clinic in Rochester, Minnesota, to undergo a radical thoracotomy to remove the cancer in her left lung, followed by a second procedure on her right lung.

Admittedly a mom first and a patient second, Sara pushed to have the surgeries as soon as possible, so she would be back home in Eugene when school let out for summer break.

“Fortunately, we have family and great friends in town, and that made it possible for me to leave home and undergo these procedures, But as a mom, you just want to be with your children,” Sara says. “I made a lot of my health decisions based on my kids, not necessarily what was easiest on my body.” 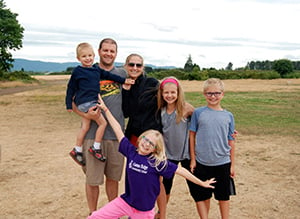 Sara returned home to more chemotherapy, only to have the cancer return early last year. Given the odds, she wasn’t surprised by the recurrence, but it was upsetting nonetheless.

Sara’s oncologist, Dr. Christopher Yasenchak, started her on a medication called irinotecan, which shrunk her tumors dramatically. However, a scan just before Christmas last year showed the cancer was growing again.

Currently, Sara is still receiving chemotherapy, now in pill form. She remains hopeful that her disease can continue to be managed and that, perhaps soon, a breakthrough in immunotherapy may lend itself to new treatment options. She’s grateful for the support and care she’s receiving from Dr. Yasenchak and the staff at Willamette Valley Cancer Institute.

“Those relationships that you never thought you would come to need or rely upon, have turned into something really special,” Sara says. “The doctors, nurses and staff are so knowledgeable and they’re so invested, it’s like an extended family.”

A fan of country music, Sara listens at home and in the car. On her good days, it entertains her. On the tough days, it soothes her.

“There are some songs that can really lift you up. There are others that let you be sad, and that’s OK, too. But mostly, the music inspires me.”

Sara received a surprise in the fall of 2014, when she attended the Zac Brown Band concert at Matthew Knight Arena. Some friends who had special passes to meet the band members before the show shared with them Sara’s story. During the concert, the band dedicated one of Sara’s favorite songs to her, called  “Quiet Your Mind”.

“It was amazing!” she recalls. “And then they came over to the Wild Duck Café for a meet and greet after the show, and I was able to say thank you. It meant so much.”

Sara admits her perspective on life has changed since she was diagnosed. She doesn’t sweat the small stuff. Instead, she focuses on the relationships she has with the people she loves. And she looks at birthdays in a way she never did before.

And she reminds herself to take the advice of the Zac Brown Band—to quiet her mind, take it all in and keep moving forward.

Her advice for other cancer patients?

“There are so many breakthroughs that are happening in cancer research. While your situation might seem dire, it could change with just one new drug. Hold on to the hope that something new is coming and that it will make your life better.”