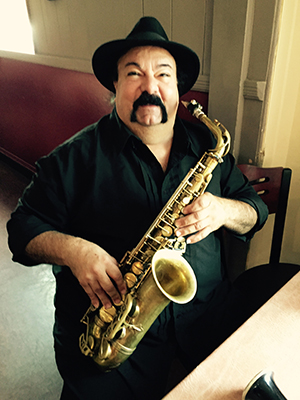 Eugene musician Paul Biondi has music in his blood. The 58-year-old picked up his first musical instrument in the fourth grade and has been playing professionally since age 13.

“I love what I do every day of my life,” Paul says. “I’m so grateful to work on my craft for a living.”

During his musical career, Paul has played with greats like Frank Sinatra, Tina Turner and Barbara Streisand. He’s known for his ability to play almost any instrument in the woodwind family, as well as his trademark talent of playing two saxophones at once.

But in 2013, Paul’s life hit a sour note when he was diagnosed with lymphoma and colon cancer.

“I felt doom and gloom immediately,” Paul admits. “My diagnosis opened my eyes to a harsh reality. No matter what race, no matter how old you are, cancer is just something that enters into people’s lives and then you have to decide how you’re going to handle it.”

Paul has always been willing to lend a hand to those in need. In 2006, he founded the Musicians Emergency Medical Association, a nonprofit organization that provides resources to musicians when a medical emergency occurs. But Paul never expected the tables would turn and he would find himself facing the financial fallout of cancer. On top of the cost, Paul continues to deal with the side effects of treatment. He suffers from neuropathy, a painful tingling and numbness in his hands, which makes it difficult to play music and earn a living.

“I grew up in an Italian family where my parents were so grateful to become citizens of the United States. We were taught: Don’t default on your bills. Don’t buy more than you can make payments on. Meet your obligations,” Paul says. “So, when this hit and I realized how much it was going to cost to go through treatment, how much work I was going to lose because I’m not able to play and perform—that was devastating.”

A social worker at Willamette Valley Cancer Institute, where Paul received treatment, learned of his struggles and connected him with Oregon Cancer Foundation’s Financial Assistance Program. The Foundation provides stopgap emergency funding to patients undergoing cancer treatment in Lane County. The assistance is provided in the moment, helping a patient where they need it most. That may be a bag of groceries or a tank of gas, or funds to pay rent or utility bills.

“I received a donation from Oregon Cancer Foundation at a time when I hadn’t been working. I’d had to cancel over half of the jobs that were offered to me and my car was in the shop,” Paul says. “If you have to worry about how you’re going to pay your rent at the end of the month or your light bill, things most of us take for granted, that hurts. But Oregon Cancer Foundation helped me get my car out of the shop and pay down that bill. That’s meant the world to me.”

Despite the pain he deals with daily, Paul remains optimistic. He encourages people who want to help others in the community to consider making a donation to Oregon Cancer Foundation. He recognizes that someone gave so he could be helped. Now, Paul plans to pay it forward. He says he’s reminded daily that he has a lot to be thankful for.

“I live in a great place. I’m surrounded by a community of people that I love. I think it’s important for my healing to stay positive and if I can do that and offer words of encouragement to others going through this, then that’s what I plan to do.”