The healing power of a tutu

Kelly Lee is a firm believer that everyone should have an inner superhero. It just so happens that her alter ego wears colorful tutus and military boots.

Donning colorful tutus is how the 51-year-old legal assistant channeled a strength she didn’t know she possessed during one of the most difficult periods of her life—a breast cancer diagnosis and the year of treatment that followed.

An unexpected diagnosis
Kelly’s life changed dramatically in May of 2015. She was five years overdue for a mammogram when she finally went to the doctor. The results of her screening came back worrisome so she was called back for a biopsy.

“I was told that I had fibrosis, not cancer and I was so thankful,” Kelly recalls. “Two days later, the doctor’s office called back and said there had been a discrepancy and I just knew it was cancer. In that moment, I thought, ‘I’m going to need something bigger than myself to get through this.’” 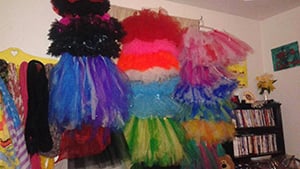 That “something bigger” was a tutu, of all things—lots and lots of tulle in bright, cheerful colors. On the first day of chemotherapy, Kelly walked into the infusion room at Willamette Valley Cancer Institute in what would become her uniform of courage.

“At first, my daughter made my tutus, then I took over creating them, and they got more and more elaborate. Let’s just say the workers at Jo-Ann Fabrics got to know me really well,” Kelly says with a laugh.

Wearing her unique battle armor, Kelly snapped a selfie before each chemotherapy appointment and posted it to Facebook.

“It was my way of making this whole ordeal manageable. There is nothing fun about cancer. But when I wore my tutu to chemo, I would see people in the infusion room smile or even laugh out loud. It was perfect.” 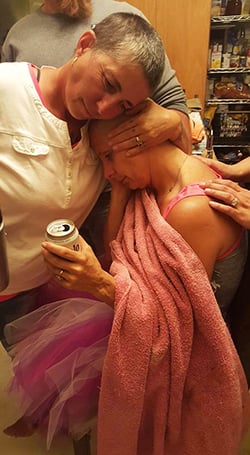 Kelly and her sister, Kathy

There are times when Kelly struggles to be strong—like when her once waist-long hair started falling out after her third week of treatment. Once again, she called on the strength of TuTu Girl and the loving support of her family who gathered together to help Kelly shave her head. Even her sister, Kathy, shaved her own head in solidarity.

“It was after Kathy shaved her head that she found out she had to get her driver’s license renewed and have a new photo taken!” Kelly says. “We laughed about that one.”

Lessons learned
Kelly used to think that being strong meant handling difficult situations on her own. She now knows strength comes in many forms, and she recently joined a support group. She’s also discovered that obstacles that seem overwhelming can often be overcome with a little patience and a change in perspective.

“When I was faced with a year of treatment, it seemed like forever. But then I turned around and it was over. My advice to others is to break down the hard stuff into more manageable pieces of time—little steps—and you will get through it.”

Kelly admits that some days are more difficult than others. She deals with neuropathy and joint pain—both are side effects of treatment—and there are days she gets flustered because she just wants to feel like her old self again. That’s why she decided to join the Eugene Family YMCA’s LIVESTRONG program and start exercising again.

No matter how she’s feeling, she makes an effort to be thankful.

“I now make it a point to find the positive in every situation. Sometimes, you have to look a little harder, and some days it takes longer to locate it, but it’s there.”

And on those days when she needs a little more strength—she summons TuTu Girl and puts on one of her colorful creations.

“Regardless of how silly it might seem to others, whatever gives you inner happiness and the strength to pull yourself through, just do it,” she says.