Finding support in the midst of cancer

As a real estate broker in Lane County for 21 years, Charity Crosby is very much a people person.

“What I love about my job is the relationships,” Charity says. “I’m selling homes to people and then their children, then their grandchildren. Or, I sold someone their first house and they’re ready to have kids. It’s really about following people’s lives, and they’re following mine, too.”

“She had chemotherapy and radiation in the beginning, and it didn’t work. It just kept spreading, and she passed away in November,” Charity says. “I found out two days after my sister’s funeral that I had breast cancer.”

Charity, who naturally exudes positivity, began to experience the physical and emotional toll of her own cancer diagnosis.

“I have good days and I have bad days. There are days that I just stay in bed. I’m tired, I’m nauseous, there’s pain. But you have to tell yourself it’s not going to last forever.”

Since her diagnosis, Charity has shared her journey on Facebook and discovered that posting updates is a good way to keep family and friends informed of her situation. It also spurs others to send her positive thoughts and support.

“When I have bad days, I will go through those posts and I will read the comments people have left me and they give me hope,” she says.

Cancer’s financial toll
The oldest of seven siblings, Charity is surrounded by family; her mom and her daughter are by her side during every medical appointment. But when her medical bills began to impact her finances, Charity realized she needed a different kind of support.

Her care team at Willamette Valley Cancer institute connected her with the Oregon Cancer Foundation’s Financial Assistance Program, which provided Charity with gift cards for groceries and gas, so she can continue to get to and from work and treatment.

When chemotherapy began and Charity lost her hair, she was introduced to the Believe Boutique, a collaboration between WVCI and the American Cancer Society that provides wigs, scarves and turbans to cancer survivors free of charge.

“It’s hard to lose your hair. It’s hard to shave your head,” Charity says. “You walk in this room at WVCI and they have these beautiful scarves and these brand-new wigs. My daughter went with me. We were in there for an hour, and we had a great time trying it all on.”

“It’s the little things that make you feel better sometimes. It really is,” Charity says.

Thankful for community support
Before Charity was diagnosed with breast cancer, she was unaware that there were so many community resources available to cancer survivors. This support has helped make the journey a little bit easier.

“People have other things to worry about, like getting better, keeping positive, versus worrying about paying their bills, putting food on the table, wondering how they’re going to get to their next medical appointment,” she says. “Having these resources available really changes the outlook of cancer, and you don’t feel like you’re alone. That changes a bad day into a good day.”

Focusing on the future
After Charity completes chemotherapy, she will undergo surgery and then radiation therapy. She’s hoping to complete her treatment by her birthday in October, which is Breast Cancer Awareness Month.

To learn more about resources for patients in the community, click here. 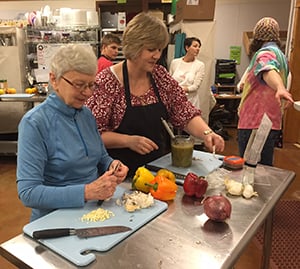 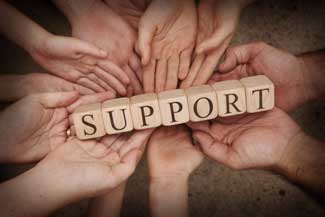