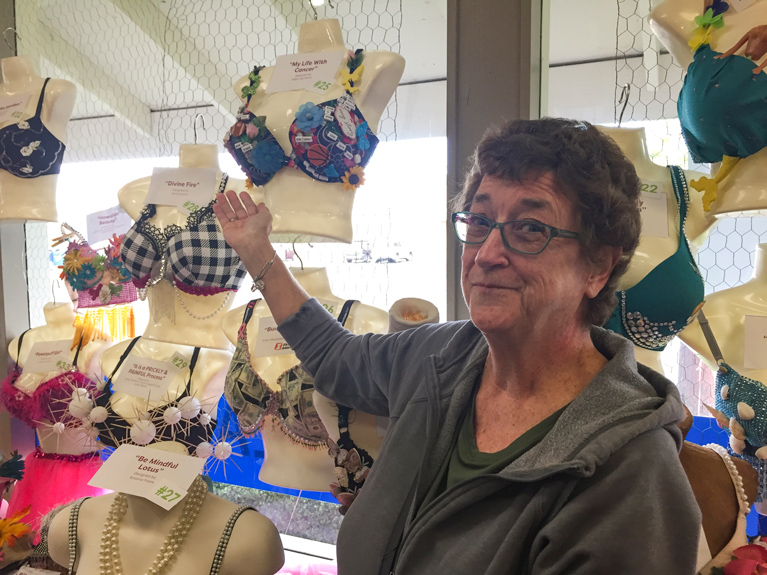 Colon cancer survivor encourages others to focus on what matters

Robin Gambino considers herself an optimist. So, when her health took a turn shortly before Christmas in 2013, she expected to be back on her feet in no time. Even as she lay on a gurney in the hospital emergency room waiting for her diagnosis, she believed that whatever was wrong with her wasn’t severe.

“I told my family, ‘Go to dinner, you guys. I’m sure I’ll be fine,'” Robin recalls. “Then the doctor came in and said, ‘I don’t know how to tell you this, but you have stage 4 colon cancer.'”

The next morning, Robin underwent surgery and began what has now become a nearly five-year fight against the disease.

Under the care of medical oncologist Dr. Benjamin Cho, Robin began chemotherapy at Willamette Valley Cancer Institute and Research Center. When the cancer spread to her liver, she endured more surgery and additional treatment. Finally, everything looked good. Then the cancer returned in her liver and later spread to her lung. For the next couple of years, Robin received a variety of treatment regimens—all the while, she remained hopeful.

Just days after participating in the Susan G. Komen Race for the Cure this spring, Robin was hospitalized and moved to hospice, where she was told she had only a few months to live. But Robin wasn’t ready to accept that prognosis. In addition to being an optimist, she is also a fighter—and both of those attributes quickly kicked in.

Two months later, Robin was removed from hospice and is now continuing chemotherapy.

“Dr. Cho told me that if the treatment stops working, there are other treatment options available,” Robin says. “It makes me feel good to know that we’ve come to the point in cancer research where patients have options. I think back to when my dad battled lung cancer 30 years ago. They didn’t have the options we have now.”

Offering support to others
Robin has always been the type of person who lends a hand to others. She’s participated in community fundraising walks, food drives, Relay For Life; and she donated eight ponytails to Locks of Love. For the past three years, she’s taken part in Bras for Cause, decorating a bra and raising money to support cancer patients through Oregon Cancer Foundation.

This year, Robin created a bra titled, “Living with Cancer,” and it’s adorned with items that reflect the things that mean a lot to her: sports decorations for her nieces and nephews who play athletics, flowers and inspirational words that remind her to stay positive.

“Being part of Bras for Cause makes me thankful for what I have, that I’m still here. It really makes me happy to see kids participating at the Build-a-Bra events and learning what this is all about at a young age.”

Living each day
Experiencing cancer has made Robin think about her life in new ways; appreciate the people who mean the most to her, including her son, Zach; and value little things that never seemed very important before. She encourages other patients to do the same.

“I used to say, ‘coulda, woulda, shoulda.’ But not anymore,” Robin says. “Make sure the people that you love and the friends that you cherish know how you feel about them. Because life really is too short.”

Looking back on her cancer journey, Robin now sees the past five years for much more than her diagnosis and the many surgeries and treatment appointments that followed.

“Everyone I have met since my diagnosis, I have met for a reason,” she says. “When I went to the ER that night, I met my surgeon, Dr. Winnie Henderson, who put me back together. Then, I met Dr. Cho, who has helped me figure all this out. I was supposed to meet those people. I couldn’t ask for better health care providers. I feel at home at WVCI.”

Robin also encourages patients to find support. She is currently attending Oregon Cancer Foundation’s Survivorship Series; and, while she admits to being an introvert and a quiet observer, being among other survivors has helped her in ways she hadn’t expected.

“I used to ask, ‘How did this happen to me?’ But that is a waste of energy. Focus on what you’re going to do about it. It’s a journey,” Robin says. “We each have our own chapters in our life to complete. We all have a purpose, even if sometimes we don’t recognize it right away. And these days, we need to let go of the negativity and find the positive. That’s how you get through this.”