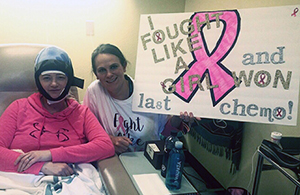 Cancer patient keeps her cool and her hair during chemotherapy

When Jessie Wells prepared to begin chemotherapy earlier this year, there’s one thing she knew for certain: she didn’t want to lose her hair.

“It might sound vain to be worried about something like that, but vanity didn’t have anything to do with it,” the 39-year-old mother of four says. “I wanted to keep my hair so my children wouldn’t worry. I wanted to live as normal of a life as I could, and I didn’t want people to give me sympathy simply because they could see that I’m sick.”

Jessie was diagnosed with inflammatory breast cancer in April of this year after noticing changes in one of her breasts. Having no history of cancer in her family, Jessie was devastated by the news. But she was also determined to educate herself about the disease and to be her best advocate.

“I decided that I would not be a statistic of this disease. I will fight it with everything I have.” 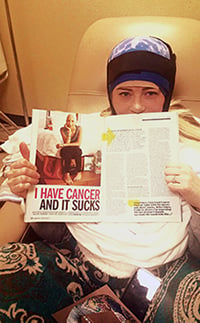 The power of information
Jessie draws strength from knowledge, so after her diagnosis, she turned to the Internet and began to learn all she could about inflammatory breast cancer and its treatment. As she prepared for chemotherapy, Jessie did one more search. She typed in “chemotherapy” and “hair loss” and that’s where she learned about a device called a cold cap.

Cold caps have been used successfully in many parts of the world, but it wasn’t until December, 2015 that the Food and Drug Administration cleared the way for the caps to be marketed in the United States to women with breast cancer undergoing chemotherapy. They can be rented from several different companies, but Jessie’s insurance did not cover the cost, which can range from $300-$600 per month, on average.

Undeterred by the cost, Jessie sought help from The Rapunzel Project, a nonprofit organization dedicated to helping chemotherapy patients keep their hair during treatment by making cold caps accessible and affordable. Through The Rapunzel Project, Jessie received a grant to help cover a large portion of the cost of renting an Arctic Cold Cap System.

“I thought, I’ll try it. I really felt like I had nothing to lose. The worst case scenario was that my hair would fall out anyway.”

How the cap works
Cold caps are just that—super-cooled caps that constrict the blood vessels in the scalp, which then reduces the amount of chemotherapy that reaches cells at the hair’s roots.

The caps are filled with a soft gel, which must be kept frozen until just before use— either in a biomedical freezer at an infusion center, or on dry ice in a special cooler, provided with the cap—in order to maintain a temperature of -30°C (-22°F).

Fitted to the head and held in place with Velcro fasteners during treatment, the cap must be worn for at least 45 minutes before a chemotherapy session begins and a minimum of three hours after the infusion is complete.

In addition, the cold cap must be changed every 20 minutes, and changed as quickly as possible to prevent the scalp from warming. This requires each patient have a partner to help. For Jessie, that helper was her best friend, Kim, who accompanied her to each treatment session.

While WVCI does not provide the caps and is not involved in their handling, Jessie is one of the first patients at WVCI to use one, and she drew quite a bit of attention, from both patients and staff who were impressed by how well it worked. Aside from some mild shedding, which is normal, Jessie kept her hair through nearly four months of chemotherapy treatments.

“I was so excited that it worked. It is a commitment, because there are a lot of steps to follow when you use a cold cap, but I want more people to know that it’s an option,” she says. 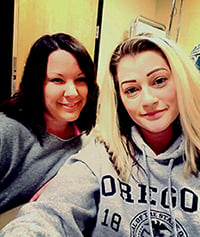 Looking ahead
For Jessie, keeping her hair during chemotherapy was a victory—one victory in what she hopes will be many more to come in her fight against breast cancer.

Jessie admits that there are times she worries about the future, but she reminds herself—and encourages other patients—to focus on what’s most important. For Jessie, what keeps her strong is her husband and her four, beautiful children.

“Just take it one day at a time. Focus on where you are and where you want to be. Force yourself to be positive. You have something to fight for,” she says.