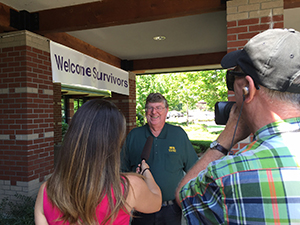 When Fred Wittkop spoke at Willamette Valley Cancer Institute’s Cancer Survivors Celebration earlier this month, he wanted those in attendance to know one thing: when it comes to cancer, having a positive attitude is critical.

“The reality is you cannot control certain things that happen to you,” Fred says. “You have to snap out of your funk and figure out what you’re going to do next.”

Fred has always considered himself a positive person, and that trait came in handy ten years ago when he underwent a routine colonoscopy and was diagnosed with stage II colon cancer. Fred had surgery to remove the cancer.

“My wife, Peggy, was the designated worrier, which allowed me to focus on my work. I’m an electrical contractor and engineer, and I love what I do. It was easy for me to concentrate on my job, while Peggy took care of all the details that went with the cancer.”

Following his surgery, Fred’s doctors were faced with a difficult question: Should he undergo chemotherapy? This is often referred to as the “million dollar question” when it comes to stage II colon cancer, and studies have not determined a clear answer.

To help figure out what was best for him, Fred and Peggy traveled to Mayo Clinic in Rochester, Minnesota, where specialists were able to analyze a sample of Fred’s tumor and identify its genetic makeup. Based on the tumor’s markers, Fred was told there was a 95 percent chance the cancer would not return. Based on that information, he decided against chemotherapy.

Unfortunately, two years later, despite the odds, the cancer returned.

“I was told that if the cancer came back, it would likely recur in my lungs or liver; it settled in my liver,” Fred says.

He underwent another surgery and opted for chemotherapy at WVCI. That was eight years ago, and the cancer has not returned.

Fred is a passionate advocate for regular cancer screenings, and he encourages others to not put them off.

“Twice, I’ve been diagnosed with potentially terminal illnesses, and I never had any symptoms. It was all caught through routine screening,” Fred says. “When doctors encourage people to be screened, it’s a valid plea. The technology exists to diagnose cancer early and increase your chances of survival.”

In an effort to help others going through cancer, Fred has served on the board of Oregon Cancer Foundation since 2013. Through its Financial Assistance program, the Foundation provides stopgap emergency funding to patients undergoing cancer treatment in Lane County.

“Cancer is not a cheap date,” Fred says. “People often find themselves in a very difficult situation. No one should have to choose between paying their light bill or getting the treatment they need. It’s rewarding to be part of an organization that can help alleviate that burden.”